What can I say?

Is a constant theme regarding my well laid ride plans going awry developing?

It was meant to be simple and follow the example set by former branch president, the late Bob Tait and do a ride to Jerusalem Creek for the year’s opening ride.  History indicated it would probably be quite hot, so I even planned an extra rest stop or two.
What could possibly have gone wrong?

It was raining quite heavily when I set off to Lilydale for the ride on Sunday 5 January and that was a good thing in view of the fire crisis current at the time.  I soon discovered that my waterproof motorcycle clothing wasn't - waterproof. In a way that was good too as it enabled me to plan my winter riding gear.  Rain - good but it was damn cold too – I saw 10 -12 degrees through the Black Spur on my ride home Brrr!

The weather (or my alleged BO) must have put some people off attending which was mildly disappointing as my riding gear even had its rinse feature working.   It was a small group indeed including branch committee members Brian, Greg, Mike, Pat and myself plus Big Dave, Vince and prospective new member – Gavan.

The briefing didn’t take long and I added an additional caution about the slipperiness of the roads due to the rain after the long dry spell.
We rode off past some vineyards in the Yarra Valley via Healesville to Dixons Creek and then over Mt Slide.  I’d like to say we enjoyed the views – they’re lovely, but I was kind of too busy dealing with limited vision and water trickling into places I wasn’t enjoying.  We took a normally scenic diversion to Murrindindi and as we climbed a hill, we came across the rear of a formerly good condition MX 5 sticking up out of the bushes after the driver had apparently failed to take a bend in the slippery conditions!   Others were in attendance, so we shivered our way on to Yea, in fact it is rumoured our TEC stopped briefly to check out some trees along the way!   After our break at Yea, several went home due to previous commitments or simply because they were both cold and wet!  Three of us (Dave Mike and I) continued on after deciding to shorten the ride to Eildon instead of Jerusalem Creek.  We still detoured (4 km of gravel each way) and visited Cheviot Tunnel. 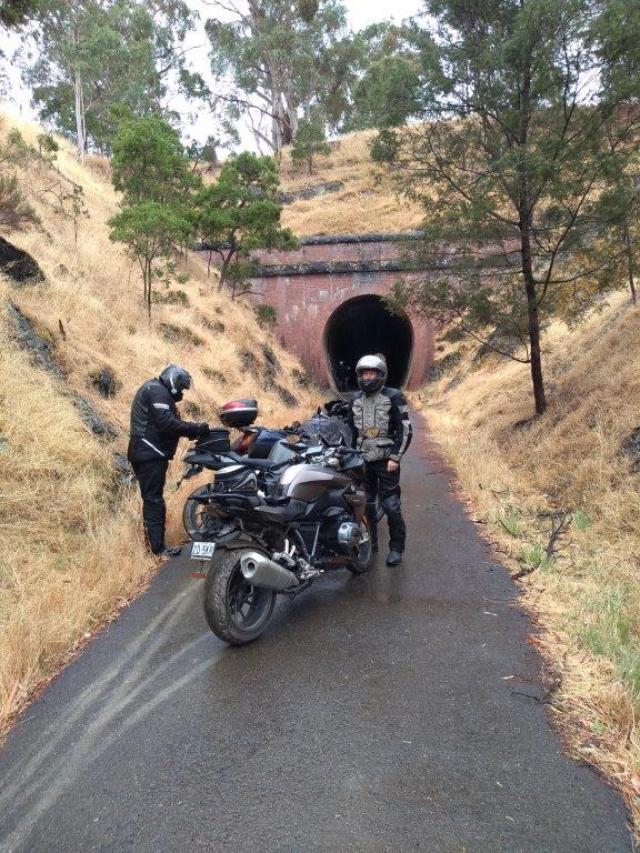 We found a couple of motorcyclists hiding in the tunnel from the rain and one was wringing his socks out.
We then rode via Cathkin to Alexandra and enjoyed lunch there instead.  It was convenient for the other two to head back to the northern suburbs and it is the late Bob Tait's hometown after all.
I rode home alone and had one of those magical events. Traffic was so light that I did not encounter one car going my way over the Black(s) Spur. - Sheer Bliss.
Despite the weather, I thoroughly enjoyed myself and thanks to those who did come along.  It was kind of strange that after such a long cool spring, the cold snap really caught us and our preparations out.
When I got home, I discovered our home had been invaded by "Reffos" (evacuees) from Freeburgh and Tongio (near Omeo).
Cheers
More pictures available here: https://ulyssesmelb.com/ride-album/john-cooks-bob-tait-memorial-ride-jerusalem-creek