Well it was an interesting week indeed as adjustments were made to the Stay at Home Regulations.   It was clear masses of people took the opportunity to engage in “Outdoor Recreation” and Melbourne’s weather was perfect for it.
On Thursday, 14 May 2020, Graham and Richard joined me from a ride out of Lilydale to “test the water” so to speak.  The weather was good, we enjoyed it so I decided to formalise things for Sunday, 17 May and advertised a branch ride from Lilydale to explore South Gippsland.  I then learned that a group had in fact dome that on Saturday and many of that group wanted to ride again on Sunday.  We decided to do 2 rides with Andrew leading a ride north and me leading a ride south from Lilydale and so it was.

Graham, Jeff and Norm joined me and while my poor old Honda felt outnumbered by the three Bavarians, we went anyway as the riders were willing to be seen out with me riding Jap #&@p!  We bid farewell to the other group, rode off and immediately left the highway to initially explore some of the shire.  The weather was lovely and after riding some of my favourite back roads on the eastern side of the range past an assortment of farms and orchards we stopped near Flemings Nursery in Monbulk and  took in the view of the mist filled valleys further east. 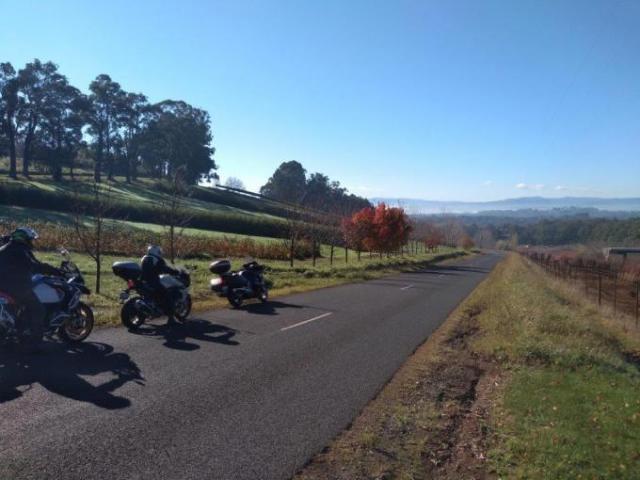 We continued east down and arrived at Cockatoo via Avon Road following a lovely little route originally shown to me by Suzanne Clarke.   We then headed south to Nar Nar Goon and then followed the railway line along the old road to Garfield where we stopped for our morning refreshment break opposite the lovely old theatre.  We were also made warmly welcome at the local bakery.   We then continued east to Longwarry and made our way south via some nice open roads to Poowong and then down to Bena.   We then enjoyed “flip flopping” along some sealed roads with great views over South Gippsland before eventually descending from the hills down to Grantville where we stopped for lunch.   Happily we had encountered very little traffic during our ride.  We enjoyed lunch at Grantville and exchanged greetings with a few other riders who were out enjoying the weather and the opportunity to ride again.
We did notice a substantial amount of traffic (including bikes) coming up the highway from the Phillip Island direction and I must admit to feeling quite pleased about the traffic free backroads we had ridden.   Eventually thoughts had to turn to riding home.   Jeff left us to catch up with a family member at Lang Lang and there was me thinking he had joined us because he enjoyed our company!   Norm, Graham and I rode north again via Koo Wee Rup to Pakenham where Norm bid us farewell.    Graham and I continued north and endured the hardship of riding Paternoster Road with its lovely views before popping into Emerald where we saw a huge amount of traffic heading the opposite way.  I recognised one rider heading the opposite way and later confirmed some of the bikes we saw were a group of Shearwaters Ulysseans.  Graham and I continued via more back roads to Seville and were staggered by the volume of traffic coming back from the Warburton direction.   We then took to back roads again and I accompanied him back to Gruyere along more of my favourite roads before bidding him farewell.  I had a simply great day and arrived home after enjoying a bit over 300 km of riding.   At one stage I even saw a large commercial jet heading for Melbourne and I hadn't seen many of those recently.   I thoroughly enjoyed the company of Graham, Jeff and Norm and it confirmed that large groups are not necessary to have an enjoyable ride.     If I have a message, it is, “Stay safe, enjoy yourselves and use common sense.”

Photos (which can be added to by others) are here:
https://ulyssesmelb.com/ride-album/outdoor-recreation-first-week