First Steve Bailes had to “bail” as ride leader at the last moment because of technical problems with “Black Beauty” but he redeemed himself by still attending the Lilydale start point and sharing Christmas Fare in the form of mince tarts and cream. 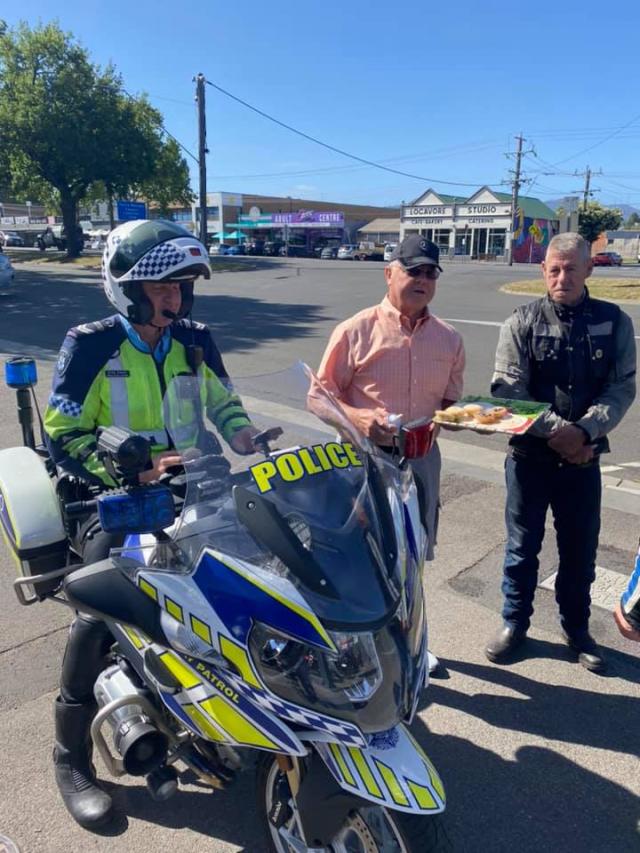 Many thanks Steve.  – well done.

(Photo courtesy of Rick)
Experienced committee member Greg took over as ride leader and changed the destination. Branch president Brian volunteered to be the Tail End Charlie on his club plated Yamaha.
What could possibly go wrong?     Many of the usual BMW contingent were absent, so on arrival I found 2 members of the Constabulary present mounted on their BMWs amid the 15 or so ride participants.  All was convivial, some licences were checked and Christmas fare was served.    Once greetings and briefings were finalised, we rode out to Yarra Glen and then via Mt Wise and the very scenic and challenging Buttermans Track before ascending the St Andrew Kinglake Road very slowly to King Lake where we stopped for morning refreshments.
What went wrong?  During discussions it was agreed that we would attend to errands of nature and reassemble at the public facilities near the pub before heading down that delightful road to Glenburn while I went on ahead a bit to take some photos.  A couple of members called it a day and rode off towards Pheasant Creek.    Unfortunately, Brian missed that vital detail and the TEC went the wrong way!   I got some photos and then waited and waited – No Brian!  I eventually back tracked in search of Brian and came upon him finally heading down the correct route.  He didn’t register that it was me going in the opposite direction!  Safe U turn spots were few and far between so it took me a while to turn around and I didn’t catch him until I came upon him and Les waiting at the Melba Hwy.  Les took off as I arrived.  I was aware the plan had been to turn left towards Toolangi, but Les wasn’t and he was well ahead of me!    There was no corner marker and I guessed (correctly) that Les had continued on towards Dixons Creek.  I rode on to Toolangi and still no corner markers!    I stopped and rang Greg, who was arriving in Healesville.  He had been in contact with Les and agreed to wait in Healesville.  Brian and I enjoyed a lovely ride down Myers Creek Road to Healesville where we all successfully reassembled.
Then it was down the Healesville – Koo Wee Rup Road, through Don Valley and the delightful road past Kurth Kiln to Gembrook where we all enjoyed lunch and exchanged some disgraceful lies and pre-Christmas greetings.   It all ended well.   Robert advised us that he was moving north to Queensland in the interests of his health so the next time any of us see him will probably be at Lismore.  Good luck Robert.
After lunch, Graham and I rode back through places such as Macclesfield (just because we could) before we said our final farewells to each other at Gruyere.

Thank you to Steve, Greg, and Brian plus all who came along.
Ride photos are available here:   https://ulyssesmelb.com/ride-album/gembrook-not-yea-ride-december-2019
Cheers