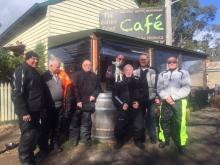 A somewhat cold and damp start to the day but none the less some seven stalwart members Jeff, Pat, Les, John, Vince, Steve and a welcome visitor Rob Harris, the Branch President from Whittlesea. Regardless of the cold the group were in fine humor taking great delight making fun of Steve in his rather bright Day Glo yellow rain wear, as a consequence he was of course “Volunteered” for tail end Charlie.

Vince brought the meeting to order to outline the choice of two routes, which after a show on hands indicated that Yarck and those scrumptious Dim Sims at the “Giddy Goat” to be the outright favourite destination. The ride took us through Wandong, Tyack over the Murchison Gap towards Ghin Ghin along the Highlands road through Highlands then on to Terip Terip eventually arriving at Yarck and more than ready for a Pit Stop, Coffee and some of those Dim Sims. The Giddy Goat is a very pleasant and welcoming establishment and is oft frequented by our club.

We were fortunate just after departure eagle eyed Vince spotted a speed trap however, as usual we were just under the limit. We were double fortunate that the rain or more accurately “lumpy” mist remained light which was a bonus, and the route was an interesting one. The damp conditions with some strong wind gusts making it challenging also entertaining for all, the mix of quiet country roads followed by some stimulating sections of twists and turns ensured everyone enjoyed themselves.

For those of you who had other pressing engagements or perhaps it was too cold and wet and were unable to attend the ride you missed a good one. Thanks Vince.