When looking back at the past couple of years, it is timely to remember that the main stated aim of the Ulysses Club is: “To provide ways in which older motorcyclists can get together for companionship and mutual support.”
Attending the 22nd Melbourne Branch Odyssey at Mansfield provided exactly that sort of camaraderie and I enjoyed it with over 30 others.
As we were reading of road closures everywhere, route planning became a serious challenge and as I set off, I had a sense of “déjà vu” and thought back to the flooded roads I encountered on my way to the national rally at Warwick Queensland earlier this year!   In fact, I know of at least 10 people who were unable to attend mainly because of the floods in Victoria and NSW.   My thoughts do go out to all those who will be dealing with the effects of the floods downstream from Lake Eildon (and further afield) for months, if not years.
Our normal route to Mansfield via Yea was simply not an option and many other routes were also closed so lots of communication and checking road and weather apps occurred as people made their way up.  Quite a few of us travelled (in small groups) via Healesville, over the Black Spur to Mansfield without major incident and we only saw water partially over the road as we crossed the Goulburn River near Mansfield.  We did see lots of closed side roads and obvious flooding all around us.
Despite these challenges, many of us did get through and we enjoyed a Friday night BBQ in rather cool conditions and many tales were told of the challenges overcome getting to the Odyssey.  One member’s trip from South Australia was several hundred kilometres longer than he had planned.  A group from “the Blue Mountains” in NSW gave their car a thorough under body rinse while exploring back roads in Kelly country but I won’t embarrass a former club president by naming him.
On the Saturday morning, ten of us set off and enjoyed a ride around Lake Eildon. 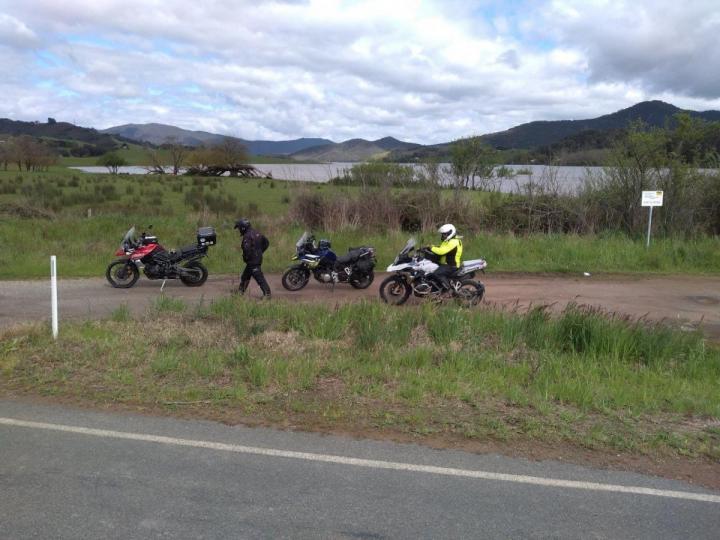 This included a couple enjoying their first event / ride with Melbourne Branch.  We took it at a cautious pace in view of the potential for landslips and trees falling and also stopped a bit more often than usual to take some photos and simply enjoy the countryside which was beautifully green after all that rain!  The ride from Jamieson is heavily forested and extremely winding but the road surface is very good. 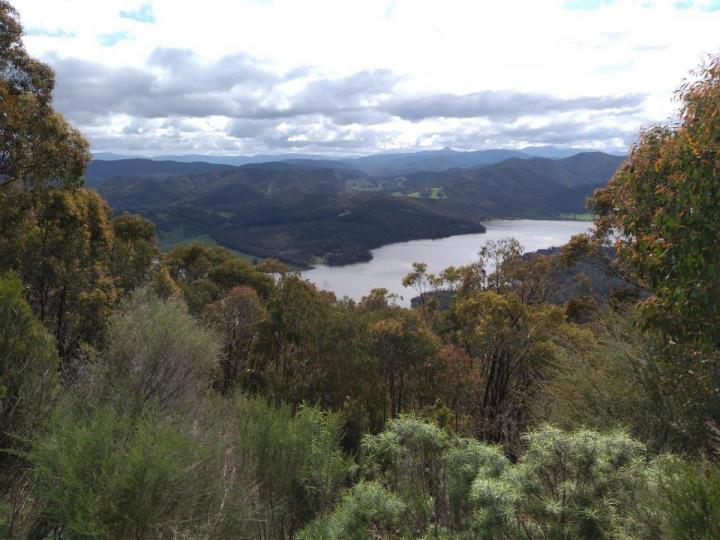 We saw, kangaroos, a wallaby, mudslides, trees down and water over the road once (shallow and clean enough to still see the road markings) so we figured the cautious pace was the right idea. 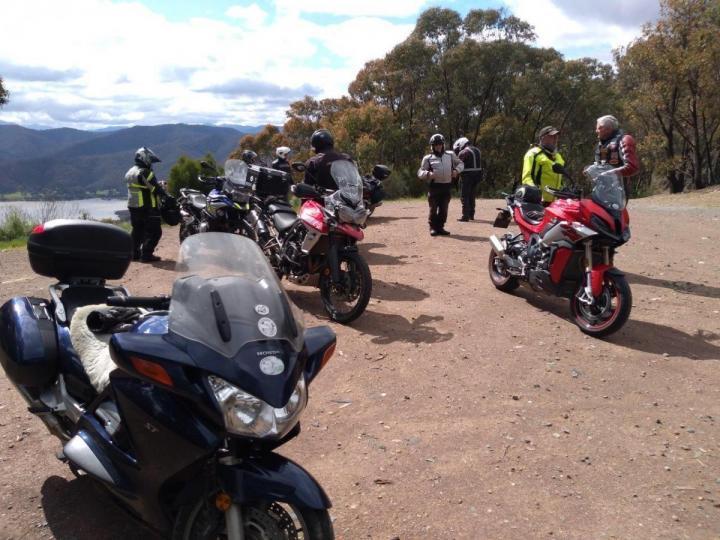 At Eildon we had lunch in the town square as take aways from the local cafés and enjoyed a good chat. 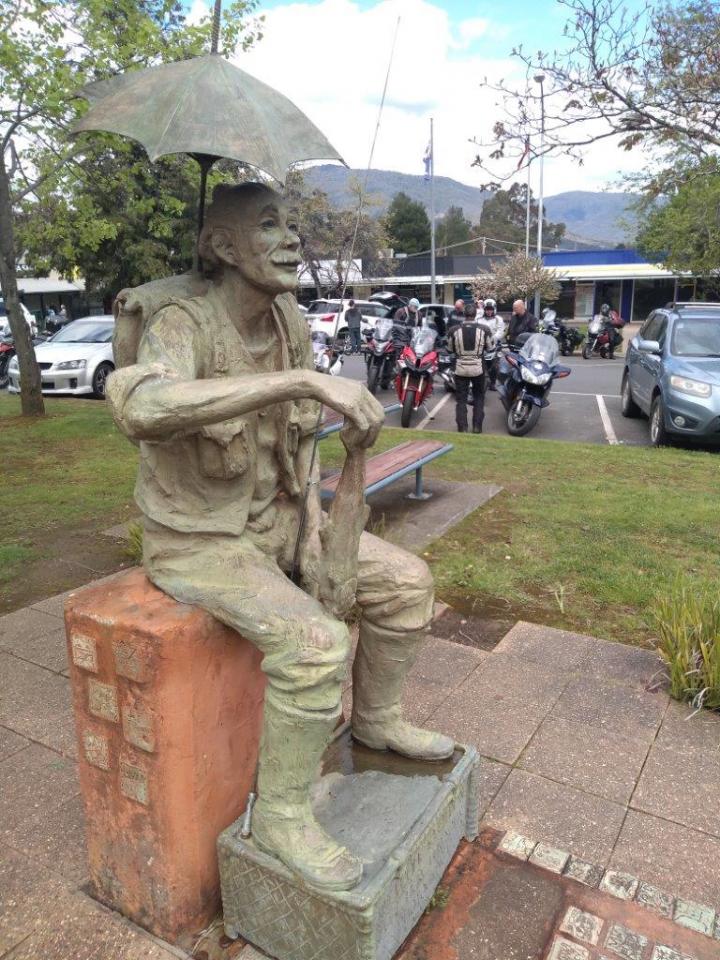 We then checked out the spillway as Lake Eildon was actually overflowing. 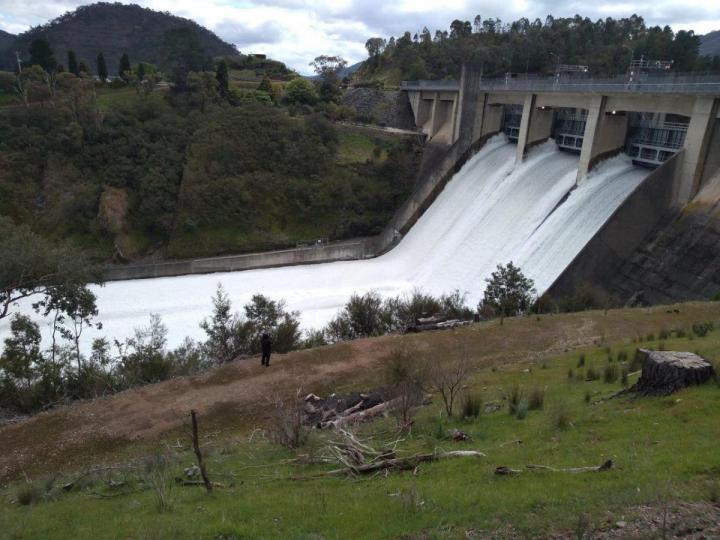 It looked both beautiful and spectacular, but I was mindful of the distress it was causing for those living further downstream.  We rode on over the weir wall and made our way up Skyline Road to again stop and take in the view before riding on to Fraser National Park turn off.   Four rode off on adventure bikes and took the dirt road via Maintongoon to Bonnie Doon.   The rest of us enjoyed descending through delightful green hills 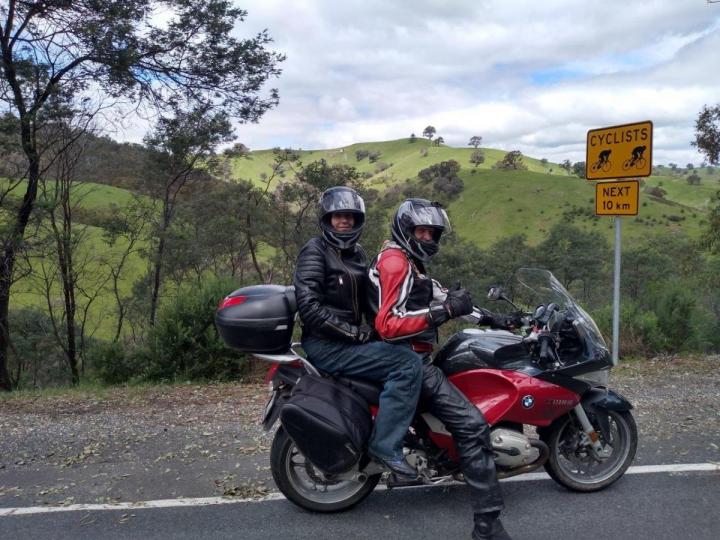 down to Alexandra and the followed more open highways to Mansfield.
After some R & R, about 30 people attended the Saturday night Odyssey dinner at the golf club.  Things were simple and this enabled ample time to simply chat with fellow members and reax as the club provided a courtesy bus to get us all to and from our accommodation.
I believe these simple arrangements work well and enhance members ability to simply enjoy the camaraderie.  One member was keen enough to arise early on Sunday morning and he then road to Phillip Island to watch the Moto GP in person!
Many thanks to all who came along and made it such an enjoyable event.  A special thanks to Pat Ryan who was the registrar and arranged dinner and liaised with the caravan park most of us stayed at.
I am about to renew my Ulysses membership for years 31 to 33 as I’m still ever so happy with the camaraderie and enjoyment I get from being part of this great Club.