Tuesday 22nd (420 kms)
Most riders successfully negotiated the Geelong Road roadworks and associated lane closures to get to the Ardeer meet point at 9am. However, Colin missed the entry into Ardeer and was picked up in Bacchus Marsh. We used the Western Freeway to get out of town and turned off to Bacchus Marsh. The first of several u-turns for the day was undertaken after a quick view of Bacchus Marsh Grammar, as the ride leader ‘recalibrated’ his GPS/directions to find the road up the back of Bacchus Marsh and past Werribee Gorge. We enjoyed the ride to Ballan, and through Mt Egerton and the wind turbines to Buninyong. We met up with Peter and Gary (the ‘Skipton Boys’, they grew up there), and had a leisurely morning tea stop there.
We then rode west through Skipton and on to Lake Bolac. Local knowledge and ‘the need for speed’ proved too much for Gary who led Mike and Peter for a quick spin through a set of fast sweepers (due to a now defunct rail line, tracks removed, and road resurfaced). After a quick stop in Lake Bolac, the ride leader set off (on what proved to be) the slightly wrong road, followed by another u-turn, and a cross-country single lane back-road. We arrived in Penshurst in time for a late lunch (at the General Store), and were met by Holly who had been ‘stalking’ Brian and was bemused by the elaborate route taken !

Being refreshed, and after advice from Steve that he would ‘wait for us at the bottom of the track’, we rode up the nearby extinct volcano Mt Rouse to enjoy the fantastic 360 degree views over western Victoria and the Grampians (much huffing and puffing after climbing the steps to the top !). We then descended and rode the 30kms to Dunkeld for a fuel stop. At this stage we realised Steve was still at the bottom of the track – just a different one from that on Mt Rouse !

Several riders stayed until Steve arrived, while the rest went on to Halls Gap to check-in to cabins in the holiday park in the middle of town (dodging a few small kangaroos on the way). Drinks and dinner were enjoyed at the Halls Gap Tavern nearby, where we got chased inside by feral Kookaburras ! The busy staff did a great job in the circumstances.

Wednesday 23rd (320kms)
A short walk across the road took us to a very good local café for breakfast, and the multi-lingual Steve a chance to practice his Hindi/Bengali ? language skills (“I have no money”  was the extent of it apparently !). We all assembled at the front entrance about 9am, except Gary who had apparently gone out the back way and took off in pursuit of us ! After waiting 10 minutes we rode up over the Grampians, picking up Gary who had stopped at a set of road-works (after realising his error, and after giving the Ducati a good run !). We rode northwest past Zumsteins and Brimpaen, enjoying the great views back to the Grampians. North to Horsham gave us a chance to fuel-up and coffee-up in the middle of town.
We took the road out past Natimuk with Mt Arapiles in the distance, and turned south before pulling into Harrow for a quick stop in the shade. Mike was pleased to see the local pub was looking better than his last visit a few years ago. Leaving Harrow, we were riding in rolling/hilly country on single lane roads again. A fast uphill right-hander with a large bump mid ride-line caught most of us out, especially Stewart who reported the Valkyrie jumped a metre ! Lunch in Balmoral was at the local store/café in the shade. We then headed cross-country down to Cavendish, more single lane roads through Victoria Valley in the southern Grampians, over Mirranatwa Gap and back into Halls Gap (this time dodging two emus crossing the road). Drinks and dinner were enjoyed across the road at The Brewery, followed by a cleansing ale or wine back at the cabins. 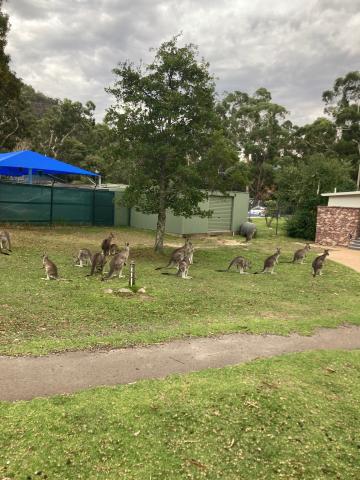 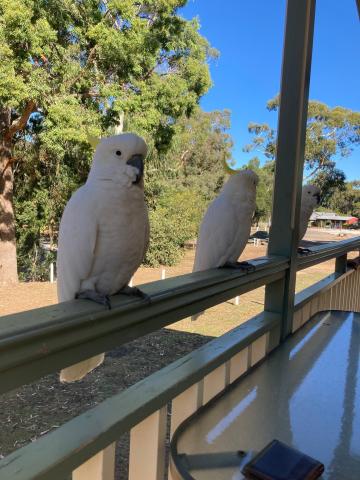 Thursday 24th (340kms)
Breakfast was again taken at the café across the road, before packing up and leaving about 9am. Colin and Gary C left early to go straight home, and Holly left us to return to Koroit. The rest of us rode out through flat country before the rolling hills around Moyston and Ararat, and then the beautiful road between the Pyrenees leading into Avoca. We rode southeast through Clunes and Creswick, then turned east to Trentham for lunch from the local bakery (a regular stop). The group split up from this point, some going direct down the freeway, some taking a more circuitous route home, arriving about 3pm.

In summary, this was a thoroughly enjoyable trip – great company on the ride, an interesting selection of roads and countryside, good weather, and a very convenient base at Halls Gap. Thanks to those who came along and made it such a good trip.

Looks like it was a great mid week trip

Some more photos are available