Courtesy of Steve Bailes
T’was on a cold and windy day that three stalwart Ulysseans, Mike Fittall, Jeff Pavlou and I ventured forth from East Kew to discover the delights of some of the magnificent sights of the Victorian Silo Art trail. 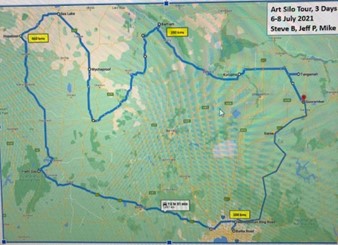 Initially the route took us to Dunkeld, then onto Halls Gap where we had a bout of rain and dark overhead clouds which discouraged us from travelling through Zumsteins, but then onto Wartock, Rupanyup, 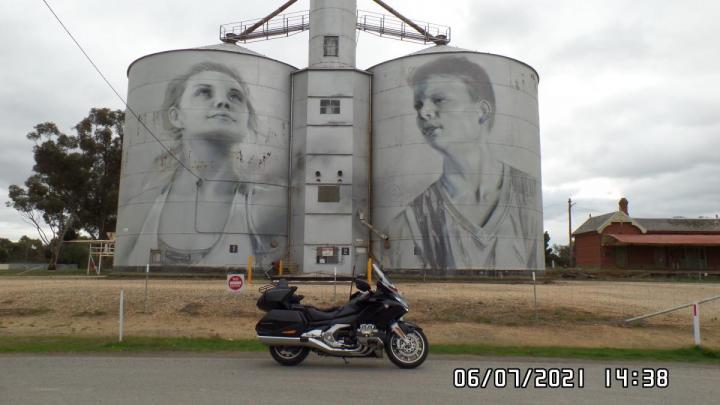 Horsham, Sheep Hills, Brim, Rosberry  to our overnight stop at Robins Nest Air (B&B)  at Hopetoun proved to be a magnificent stand-alone house with a bike port. The house included 2 x double beds and four singles full kitchen, separate fully fitted out laundry plus, plus !  It was a superb place to stay and very affordable at only 150 beer tokens. We were impressed with the house and with the pub a mere 100 paces around the corner we could not have wished for more but more there was. At the pub we found the food to be excellent with the menu including a good selection of fare and with a bonus of real home-made chips!!!
The well-furnished house with a large bike port, Pub with excellent pub grub and good company scored 10/10.
The start the next morning was quite cold but no rain clear sky we set off for breakfast and onward on our travels to Lacelles, Sea Lake the town then on to Sea Lake new viewing platform restrooms which were a welcome find and definitely worth a visit!! 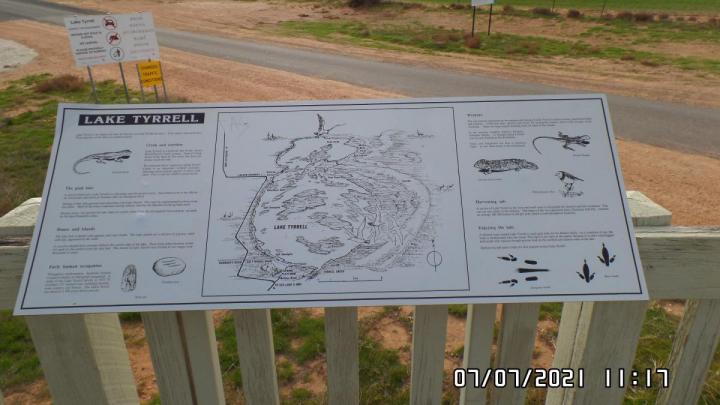 – also do check out the car park further along the firm track leading to a large car park which takes to heart of the landscape.  Nullawil was next then St Arnaud (which we missed!!).
Eventually spending the next night in Barham just of the border with NSW – (a booking mistake on my part- remember that I am a Pom) and being in NSW we had to get border passes and tested on return to Melbourne – the test by the way was a simple process and no big deal!!
The Acacia Motor Inn was our second stop and the manager was a very decent guy who like many is doing it tough with only a few if any customers he gave us good deal on a three bed room which was perfect for us. Once again as they say location, location, location and it was spot on as we were within a short walk to the pub on only 150m from the Motel!!
Due to having to have a covid test on our return and Jeff was due to holiday with his good lady he had us all up at the very crack of dawn – actually dawn was nearly an hour and a half later!!
It was frosty start and we had a problem finding a café open at that hour it seemed that country cafés and bakeries do not open until 8 if you’re lucky or 9 seemed to be the average.
Having said that when we did find somewhere to take a break they were universally helpful and both the coffee and the standard Ulysses fare of pies and sausage rolls were excellent.
Jeff left us before lunch and he missed out on some of the more colorful Silos at Katamatite, Devenish 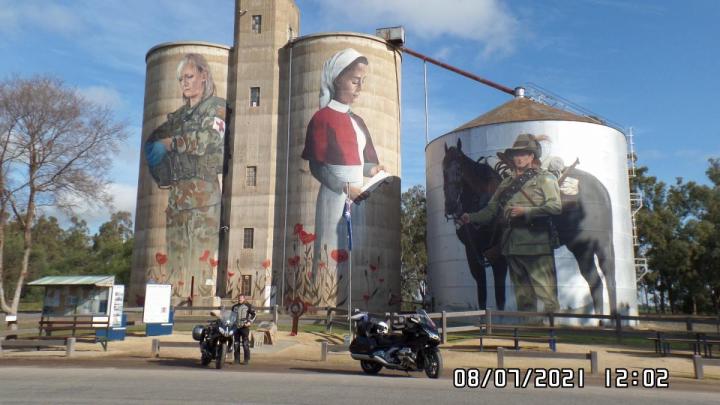 and Goorambat to mention just a few.

Our route was quite long and I would recommend either a two overnight stops slightly shorter route for example doing this west of the area covering those Silos to take in those that we missed and then taking in the Western area as a separate tour.
All in all a very worthwhile and enjoyable tour.
Generally, traffic in the area was very light which made for some easy and enjoyable cruising
It was sad to see the demise of so many country towns, many with empty shop fronts or which could not boast even a small General Store.
General points to note – For all you BMW owners you should be aware that we found that few country servos had 98 octane most have only 91!