Home » Blogs » Sailbad The Sinner not Sinbad the Sailor's blog

The picture gallery is here: https://ulyssesmelb.com/ride-album/lal-lal-ride-january-2020

I have added about 20 photos to the Ride Album - I have loaded 3 videos on my You Tube Channel and I'll post the videos on the Facebook Page!!  Sailbad (Greg)

Put simply I thoroughly enjoyed myself

I will mention a couple of embarrassing moments though

My bike looked a bit forlorn yesterday morning after being left outdoors while our home was being used as a refuge centre for some relatives from the country.

Fortunately it was still quite grubby from the previous weekend's ride 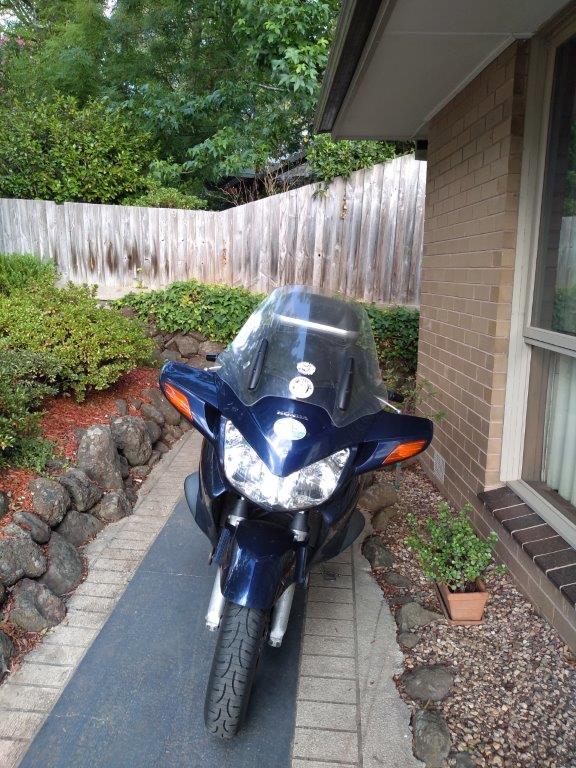 I failed Communication and Navigation yet again.

I spoke to Brian about a certain errand of nature before leaving Meredith and when I came out the group was gone!  I did remember an arm waving reference (by Brian) indicating a loop to the north so I set off in that general direction.  I found myself in Elaine (alone) and stopped to ring Brian.  Lo and behold, the group found me

.  Later on the on the ride back to Melbourne I stopped to check my disintegrating paper map to check the route around the north of the You Yangs.  It took time finding the right torn page

and Rick indicated he had the route in his GPS.  We set of with Rick leading (I thought) but clearly communication had failed again

Fortunately we found our way onto the Geelong Road via Little River and made our respective ways home.  I do hate that Geelong Road!!

Back on the good points

I loved the back country roads and valleys - gorges we explored between Elaine and Lal Lal.  Great route selection Brian

Thanks to everyone who came along and great to see Dorrit out on the bike with Carlo.
And in relation to Greg's comment.  Why wouldn't we make Lal Lal an annual destination at least?
Cheers

Ha ha John - I had no idea all this had transpired!!  Just made a great ride even more fun!!

I did Lal Lal twice in 2 weeks!!  And awarded one valley (I'd never been to before) the "Valley Of The Year" Award!!  Backing up Sunday was no chore at all!!

It's a great destination that will look different from year to year!  Plus, after 7 0r 8 years, I'll remember the #^&&**%  $@$% Aerogard!!  Seriously, let's make it "the annual re-enactment ride" or the "annual founders' ride".  When?  Spring or Autumn when there's a cataract?  Personally, I don't care - as long as we keep recognising the weekly benefits we derive from the decisions of past generations.  I could be Topol singing "Tradition - tradition!!"  Ha ha.

And John - I'm with you.....  A curse on Geelong Road!!  May its bitumen turn to marijuhana and be stolen by generations of teenage SW suburban residents till the next solstice......

Another "true believer" (Pat Ryan) had to scarper early - which way did you head home Pat?