The Bombala long week ride in March has almost become a tradition over the years.   It was great to be able to organise an event which involved crossing the border, so we decided to make it an even longer escape.  With the benefit of hindsight and news reports of traffic jams on Monday, that turned out to be a brilliant idea.
Andrew, Barry, Colin, Jack, Jeff, Julian, Mike Sam, Samuel and Stewart met me at the start point and we rode east on the freeway and after 5 km of roadworks, (but no real delay) we got up to speed.   Tail End Charlie duties were shared over the weekend.   We bid the freeway farewell at Longwarry and rode through the hills via Buln Buln and Shady Creek before crossing the highway at Trafalgar and took a short rest break.  We rode south to Thorpdale and this included crossing a very apparent (bumpy) earthquake fault line before riding some lovely backroads through farming country to Churchill and on past Loy Yang power station through Rosedale and Longford (without using the highway) to Sale where we refuelled the bikes and took a rest break beside Lake Guthridge. 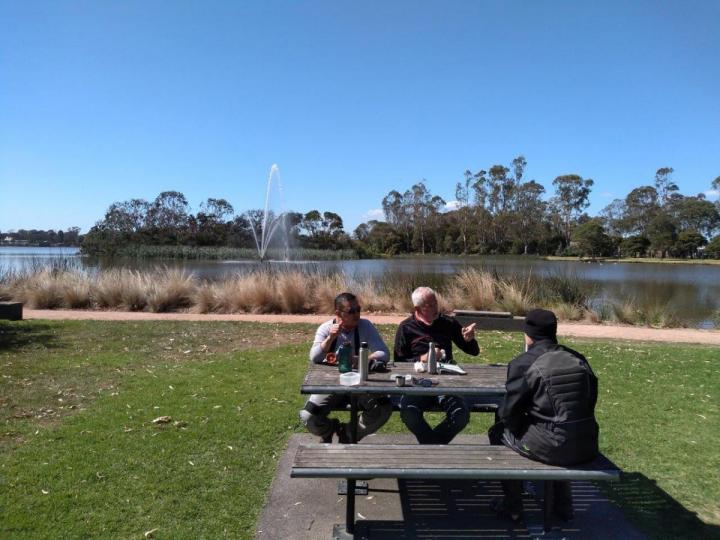 We then rode past the edge of the Sale wetlands and continued on to Meerlieu via some open back roads before heading north and crossing the highway as I had planned to Lindenow.    We the rode past some interesting farm areas before I made the first of several navigational errors on the ride.  Oh Dear.  I had intended to go via Calulu to Wy Yung but missed a turn and got to Wy Yung via the edges of Bairnsdale.   On the plus side we got lovely unplanned views of the Mitchell River flats that way, so perhaps I should claim I planned it that way.  We took a latish lunch break at Bruthen (and bypassed a lovely diversion via Buchan to save some time) and rode on via Nowa Nowa to Orbost where the group split up.   Colin, Jack and Samuel (on adventure bikes) plus Mike on an R1200 RS took winding and challenging Bonang Highway while the rest of us rode on to Cann River, refuelled and rode the very nice Monaro Highway 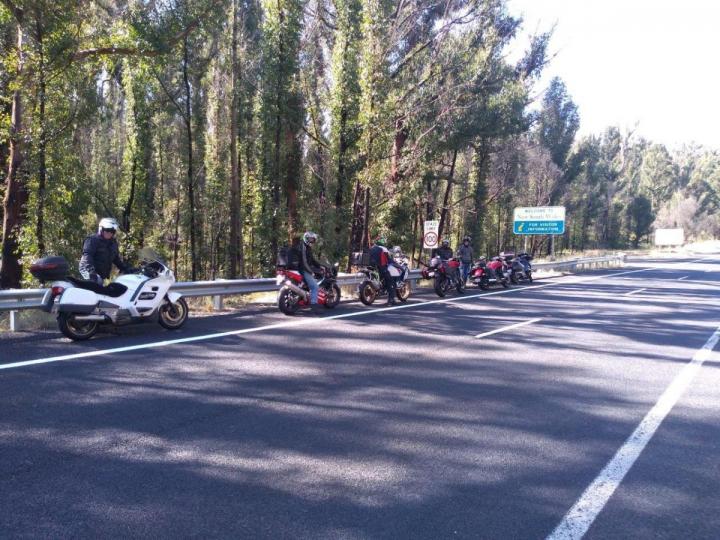 to Bombala and settled into our accommodation.   We dined at the restaurant attached to our B and B both nights and I for one enjoyed the food.  During our evening walk Stewart did espy a platypus which the area is well known for. 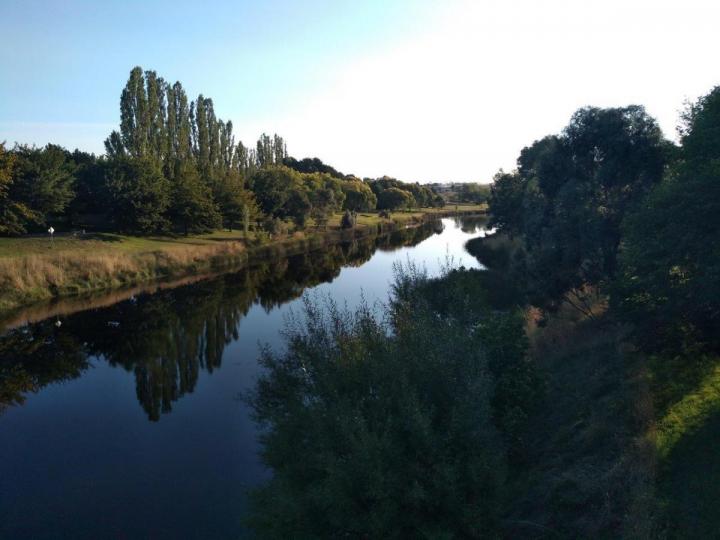 On Sunday morning we rode south for a short while and then followed the Imlay Road to the highway and onto Eden where we enjoyed a coffee break.  The road surface in Imlay Road was ghastly (possibly due to log trucks) and the scenery wasn’t pleasant – a mix of logging and fire damage.   My bike disliked to road surface so much I even checked my tyre pressure as the surface really detracted from my confidence – comfort.  At that stage my tyre pressures were in fact OK.  After checking out the port 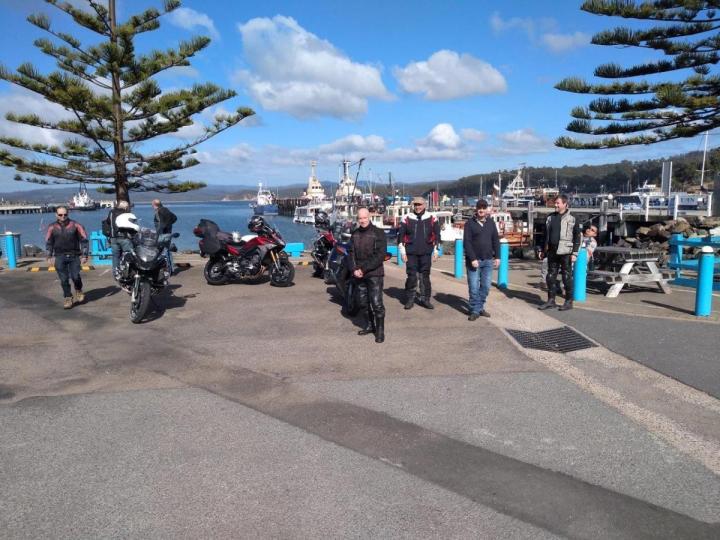 and having a café stop, we headed north and enjoyed lunch at the pub at Tathra and were glad we’d arrived early as the crowds were getting large as we left.    We then rode back towards Bega, diverted, crossed the highway and headed north to Candelo up some delightful roads.   I then had my second navigational glitch for the weekend, as the map did not tell me there are in fact two crossroads in Candelo.  This error rewarded us with a delightful open winding road to Wolumla and back -doh!.  I won’t mention that someone’s bike had a little lay down while stationary and attempting a U turn.  Shhh!     We the got back on plan and rode up to Myrtle Mountain where I was so stunned by the beautiful greenery and tree ferns that I forgot to stop and take a photo.  It really was beautiful.   From there, we picked up the Mount Darragh Road (which wasn’t as good as I remembered due to poor surface and speed limits) before crossing the Coolumbooka River on a delightful old bridge as we approached Bombala. 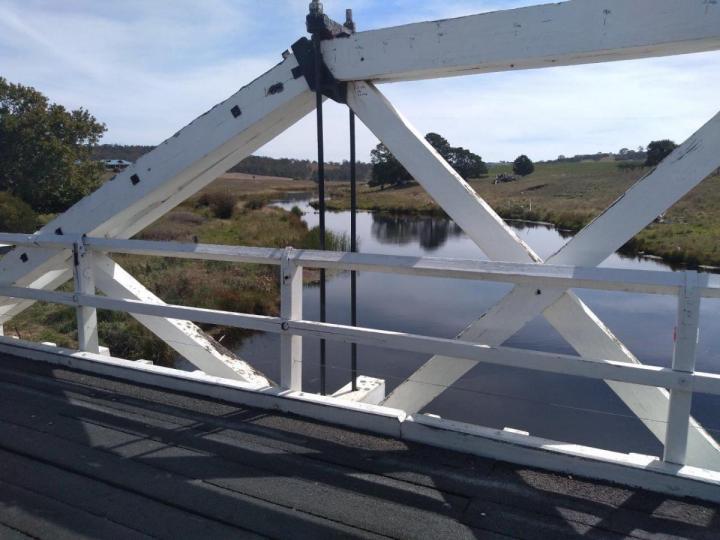 On Monday morning we rode some delightful high country roads via Dalgety and Berridale to Adaminaby where we took a break and met some riders from Canberra who were also on a multi-day ride.  We then rode further north to the historic location of Kiandra before turning down the Link Road and passing several Snowy Scheme dams on our way to Khancoban.  The roads up there were delightful, but many had been repaired after recent fires and had very steep shoulders.   During our riding we saw lots of fire damage, both from last summer and some still from the huge fires of 2003. 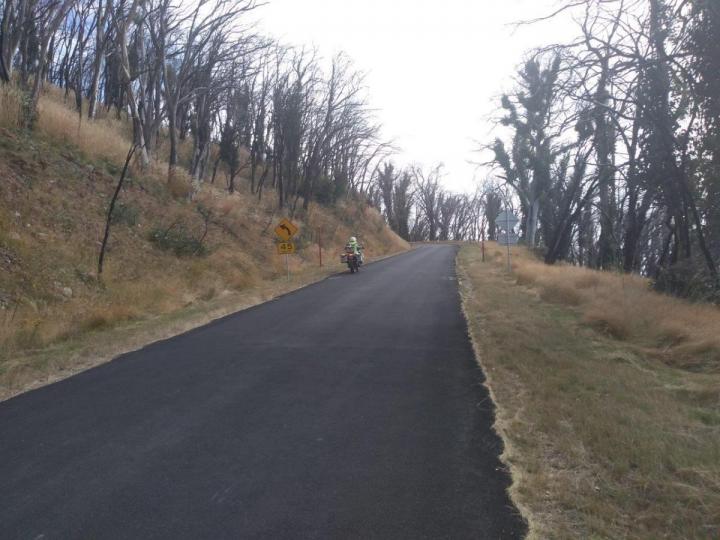 That was quite humbling.
We arrived at Khancoban much earlier than expected or planned and had to wait a while before we could get our rooms.  A bit annoying but the wait was worth it as the rooms both very roomy and very good value.   Once settled in I couldn’t avoid the temptation to get back on the bike and I rode out and checked out the nearby pondage which is also part of the Snowy Scheme.
On Tuesday morning we rode off bright and early and the views and morning sunlight on the hills was simply stunning as we crossed back into Victoria.  We the rode the delightful Murray River Road back to Granya.  I then had vision difficulty with sun glare and shade as we crossed the Granya Gap and changed direction repeatedly.  I wasn’t wearing the correct sunglasses and who stops on a road like that?   We enjoyed a good value and quality breakfast at the Tallangatta Bakery despite one poor waitress complicating order issues.  She did mean well, I’ll definitely go back there, but it did contribute to comments.
We then rode back via Yackandandah & Beechworth to Oxley, where we bid farewell to Julian who took the Hume home to Melbourne.   We rode south to Whitfield and then up to Whitlands where most of us diverted down the gravel road to Powers Lookout to checkout the view of the King Valley. I suspect I punctured my rear tyre on a sharp stone the ride out (the tyre was basically due for replacement anyway) and the bike started handling terribly along that lovely road.  I stopped at Tolmie and confirmed the problem.  We couldn’t find the actual leak, so with a combination of compressed air cylinders and Samuel’s pump we inflated the tyre enough and I limped it back to Mansfield.   I bid farewell to the others and basically limped on slowly nursing my leaking tyre while the others had lunch with the knowledge that Samuel was following with a pump.  I reinflated the tyre at Merton and Yea and was dismayed when the pump at Glenburn wasn’t working.  I did make it home safely and it reminded me that if I think a tyre is due for replacement it probably is.
I had a great time out with a group of fellow Ulysseans and we did a bit under 1800 km over the 4 days.  Thanks to all who came along, and I eagerly look forward to the next trip.

The photos are here: https://ulyssesmelb.com/ride-album/nsw-alpine-tour-weekend-2021