What a difference a year makes!  I now realise this was our first official “overnighter since March last year!
Just a year ago we rode through a blackened bushfire ravaged landscape on our visit to Corryong as part of our regular Tallangatta weekend.   Twelve months later, the contrast was staggering as we rode through fields with abundant hay and many new fences.  Many trees (black a year ago) had foliage plus epicormic shoots as they recovered from fire.   Some buildings were still blackened ruins but that was rare.  Traffic diversions were still in place for different reasons – that damned virus.
A dozen of us met in Lilydale early on Saturday 23 January.  They were Andrew, Carlo, Colin, Jack, Les, Mike, Neal, Samuel, Steve, Stewart (caught up at Yea), Terry and me.  We hit the road to try and cover some distance before the predicted 40-degree heat hit us.  Andrew and I really stood out as “bookends” in our bright yellow riding gear.  The light (reflective) colour was really good and the many vents made riding in such hot conditions as comfortable as possible.  As we passed Lilydale Airport, we saw a light plane taxiing for take-off.  We continued north up The Melba, took a diversion via Murrindindi and stopped for a cool drink at the old station on the rail trail at Yea. 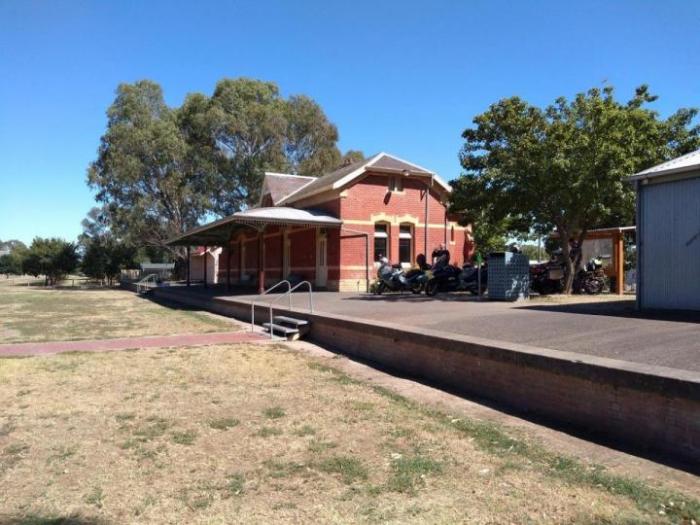 I now think that was a good stopping point as the town itself was very busy. We then climbed up though Highlands and enjoyed winding mountain roads.  It was challenging up there with varying light and shade, wind and lots of leaf litter on the road plus some fallen branches.   We descended via Gobur and stopped at Bonny Doon for another cool drink.  We then rode to Swanpool, where we crossed paths with the Shearwaters Branch and dealt with two branches marking the same corners until they stopped for their lunch break at Tatong.    We rode on via Moyhu and stopped at Milawa for lunch and another cool drink.  We then headed north and checked out the lovely rest area on the Ovens River near Everton. 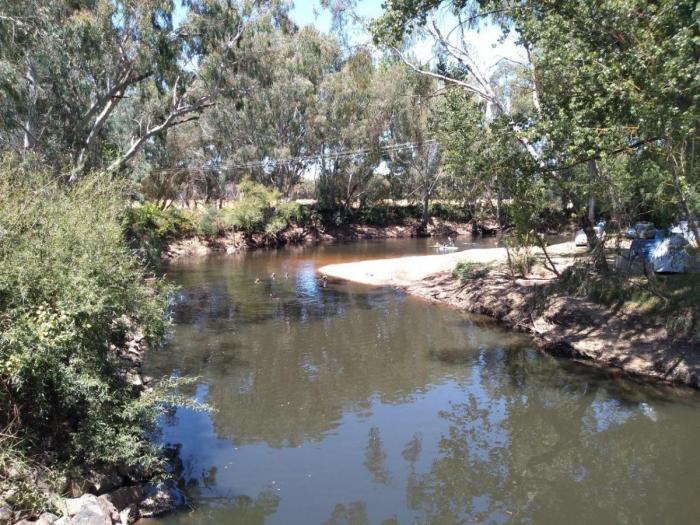 Shortly after that our corner marking system fell apart.  Oh Dear!  As I rode along the Great Alpine Road towards Myrtleford, I passed a couple of turn offs to our destination and someone turned left and took a more direct route.  Those behind followed and thus we became two riding groups!  All was sorted eventually and fuelled some banter at the pub that night.   Those with me enjoyed the road from Myrtleford to Yackandandah, where we stopped and refuelled ready for Sunday.  Then it was on via Allans Flat and some glimpses of Lake Hume before arrival at our destination -the pub in Tallangatta.  Despite the heat, I was still feeling relatively fresh, so I popped out on the bike again, checked out the waterfront, 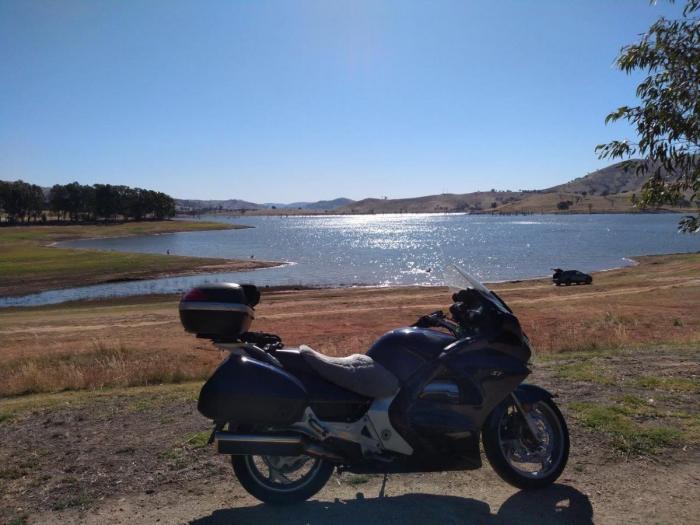 rode up to the lookout and also through Old Tallangatta (most of the town was moved in 1956 to make way for Lake Hume) and along the northern shore for a bit.   The flats exposed by the receding water were extraordinarily green. 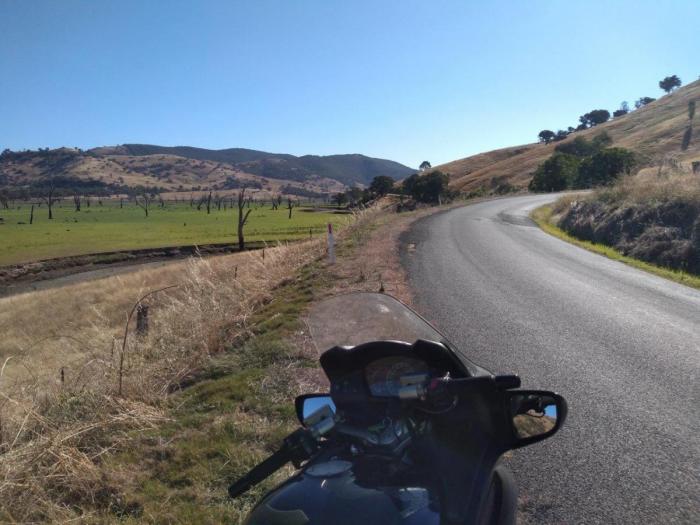 As we finished breakfast early on Sunday morning the Shearwaters group arrived to take our place at the bakery. 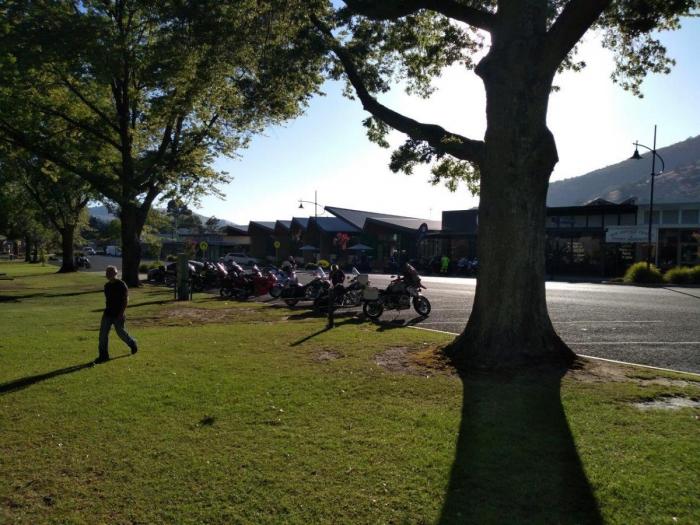 Greetings were exchanged and we headed east and then turned off towards Granya, rode “The Gap” and then enjoyed the simply lovely Murray River Road 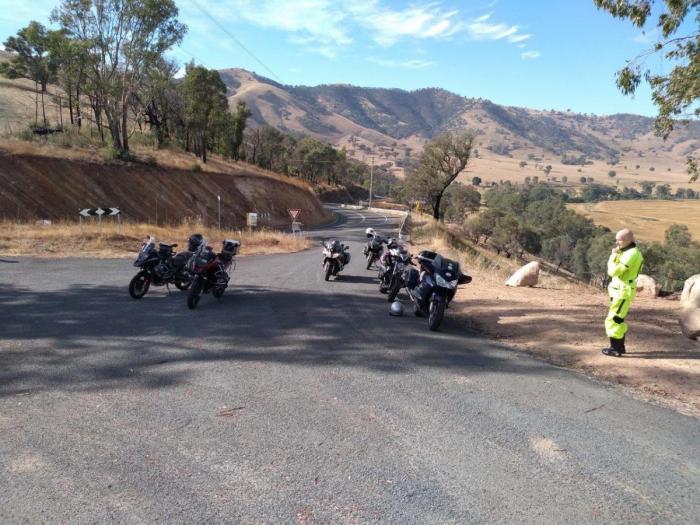 until we approached Walwa.  It was a bit disconcerting to encounter electronic signs telling us we were leaving Victoria and that we would need to get permits to come back!   Now, I’ve been known to commit the odd navigational error (or six) but I was fairly confident the sign was wrong and we continued on.  As I suspected, the sign really applied to people turning off and crossing to Jingellic in NSW and police were manning the roadblock.   We enjoyed a rest (and refreshment) at the community bakery in Corryong and once again the Shearwaters rode past!  We then rode back along the highway, turned off as we crossed the Mitta Mitta River and enjoyed riding up that valley.  I stopped for a break and decided I’d had almost enough riding for the day.  Most went on to Mitta Mitta, found it busy and returned to Eskdale for lunch.   Les and I rode Lockharts Gap Road back to Tallangatta and hung up our riding boots for the day.  The group enjoyed dinner at the pub both nights.
On Monday morning we rode off early after breakfast to try and beat the heat.  Andrew had not had enough riding yet so he rode north to Queensland and arrived there that evening.  We retraced some of out route and stopped at Violet Town for a break.  I then changed our planned route and we headed off into the hills again and rode home via the lovely water hole at Polly McQuinns.
I had a great weekend away.  The camaraderie with both group members and the others we met along the way was a fantastic example of the enjoyment we Ulysseans can enjoy.  Thanks to all who came along.
John Cook