The UCNR at Warwick 2022 Experience

The first stated aim of the Ulysses Club is – “To provide ways in which older motorcyclists can get together for companionship and mutual support” and I can't ignore the adage that “Riding is all about the Journey”.  After two years of pestilence caused cancellations and the summer floods nothing could possibly go wrong with the first National Rally in three years at relatively high altitude in Warwick, could it?

I had family / personal reasons to be in QLD a week before the rally, so I travelled alone this year.   I rode out of Melbourne a week early and started my journey on Saturday 27 March by doing the 25th Melbourne Branch Autumn Alpine Run (20 attended) and spent Saturday night at Tawonga.   On Sunday I rode to Wodonga and caught up with Ivan (the guy who started that ride back in 1998) for breakfast and then simply rode north on a tightish schedule.  On the Olympic Highway I stopped at a rest area beside a grain silo and met a motorcyclist who lived nearby at Temora. During our chat, he dissuaded me from using the Newell Hwy and I changed plans – such as they were.  I rode on up the Olympic to Cowra and then explored some backroads and ended up staying in the pub Dunedoo for the night which hadn’t even been on my radar that morning.  The hospitality (my bike stayed under cover beside the pool table), good value meal and accommodation plus chatting to a group of cyclists who also stayed the night just confirmed how simple travel in rural Australia can be so great. After some rain showers and mists as I set off on Monday morning, things improved. I was happily rolling along at a good 100 KPH somewhere near Coolah among flat corn and sorghum fields when I noticed an unsigned dip in the road ahead.   Luckily, I slowed down and was glad I did, as suddenly there was about 15 cm of water over the road in front of me.  I can water ski, but I was glad I didn’t hit that water at high speed.  I rode on, breakfasted at Tamworth and after a lunch stop at Tenterfield, I put on my wet weather pants as the cloud ahead looked ominous.  My assessment was right and when I reached Warwick, it was really bucketing rain and I “passed” on the opportunity to take an “arrived a week early” photo.
The descent down Cunningham Gap in pouring rain and with sheets of water streaming over the road wasn’t the most enjoyable ride I’ve ever done.  Darkness arrived earlier than I’d anticipated in Brisbane, and I got quite agitated and geographically challenged while trying to find my way north onto the Sunshine Coast Hwy.  My sodden gloves and fingers really didn’t help while trying to check maps on my phone.   Despite a final glitch related to a tunnel and toll, I eventually found my way out.   I then enjoyed a week with Kris and her schoolfriend from back in the 60s north of Brisbane as a milestone birthday was celebrated. (Bee Gees Way, Redcliffe)
On Monday, 4 April I rode off for Warwick.   Less than 20 km away, I came across a huge queue of trucks and cars stationary on the highway as it was closed due to flooding.  I spoke to a truck driver in the queue (there were no meaningful signs) who said that I might be able to get through via Freestone, so I tried it.  Despite several shallow water crossings over floodways, I got through and checked into my hotel.  I rode down to the rally site gate and was advised that it probably wouldn’t open until the following morning.  No problem for me, but quite agitating for the people who had planned to stay on site and were queuing in the hope that things would change.  Some retreated to hotels and hundreds more couldn’t even get to Warwick that day.
A brief overview of the organisers’ challenges.   Things had been set up over the weekend including the big marquee.  Some volunteers had already set up camp on site over the weekend.  That all went under water and people in tents woke and had to wade out!   The marquee had its “skirts” lifted for drying purposes but couldn’t be used all week!  Tent city went under water and had to be moved to higher (uneven) ground as did the campers and tent sites.   On Monday morning most roads into Warwick were closed due to flooding just to compound the problems. (Warwick - Photo courtesy of Holly Fields)
Quite a few “campers” stayed at my hotel that night.  I do know some members actually “got in” on Monday afternoon and were able to erect their tents on higher ground.   On top of that, the “rally merchandise” was held up as trucks couldn’t get through.  I was able to check in on the Tuesday.     New venues had to be found for all the meetings and the Saturday night dinner etc.  From memory, the merchandise became available late on the Friday afternoon.     Even the Grand Parade start point had to be re-evaluated as it was originally to start from a low point near the river.  In the end, the “Grand Parade” was quite impressive.
The amount of adaptation and good spirit shown was very impressive.  Well done to all involved.
The week disappeared in a blur for me, I was busy meeting and catching with Ulysseans and simply enjoying the camaraderie.  I did the recommended “self guided” ride out to Queen Mary Falls which was great and continued to Carr’s Lookout. 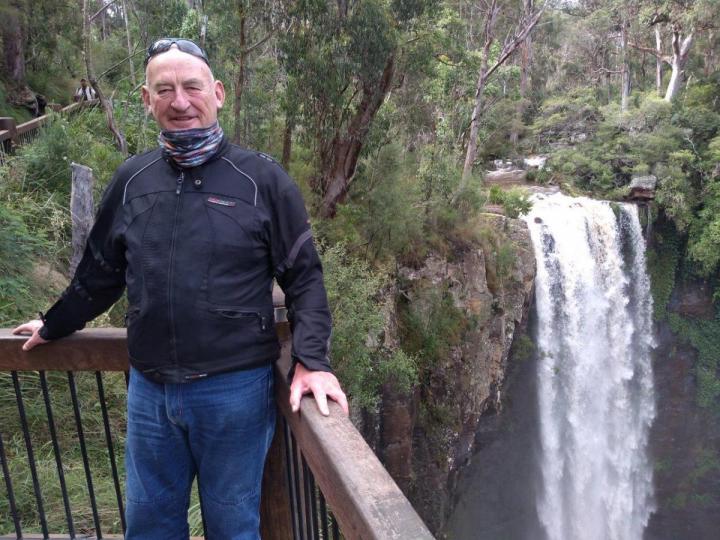 I also rode out to Leslie Dam with Geoff of South Gippsland Branch.  He stayed at the same pub as me as did quite a few others.  I also spent a few days volunteering on site which also let me meet lots of fellow Ulysseans.
Rumour has it Holly found some interesting routes too (Photo by Greg Rees I believe)
On Sunday morning, I left Warwick early and had a good ride down the New England.  I avoided the Putty Road in case of flooding and spent the night with friends in Sydney.   On Monday 11 April, I left Sydney in warm sunshine and rode down the Hume to Goulburn.  I had breakfast at Collector, and stopped at Cooma for fuel added some warm clothes.  I stopped for lunch at Nimmitabel.  The weather finally got me.   I found myself in a tangle under a roadside tree near Bombala donning my wet pants which I accomplished in a very undignified manner and probably too late.   The ride down to Cann River was rather challenging due to the rain and road conditions but happily none were actually closed, as they had been just days earlier.   Time was marching on, so I decided to forego the detour to Buchan and / or Bruthen I stopped in a soggy forlorn looking Lakes Entrance for a coffee and rest break. I then simply rode on via the highway (and skipped the numerous backroads I know to avoid flooded roads etc) to Sale to arrive in time for a grandson’s birthday on Tuesday.
I had a great fortnight away, the alpine run, the long days in the saddle in rural Australia and the numerous unplanned little things along the way plus the camaraderie of the National Rally at Warwick all added to the enjoyment of the experience.

Photos and have been posted here and people can add more if they choose.

Please feel free to send me links to video clips