I enjoyed some more great roads and camaraderie by heading out on Vince’s Sunday ride to Yarck.
It had been a very late for me th eprevious night and the weather was quite miserable when I arose so it was very tempting to give the ride a miss.  I persisted and sent Vince a message to let him know I was coming as I was running late, and it is a long way from Montrose to the Kalkallo start point.
Of course by the time I donned my helmet and left it was actually drizzling rain and it was too late for me to stop and don wet weather pants.  I rode on in rain and raised the screen a bit and had a good run with traffic lights as far as Ringwood by which time it stopped raining for a while.  I did get another squall of rain somewhere near Greensborough, but at freeway speeds the fairing did a good job of keeping the rain off me and I got to Kalkallo just in time and still dry.
Those present included Garry and Wendy on the Victory, 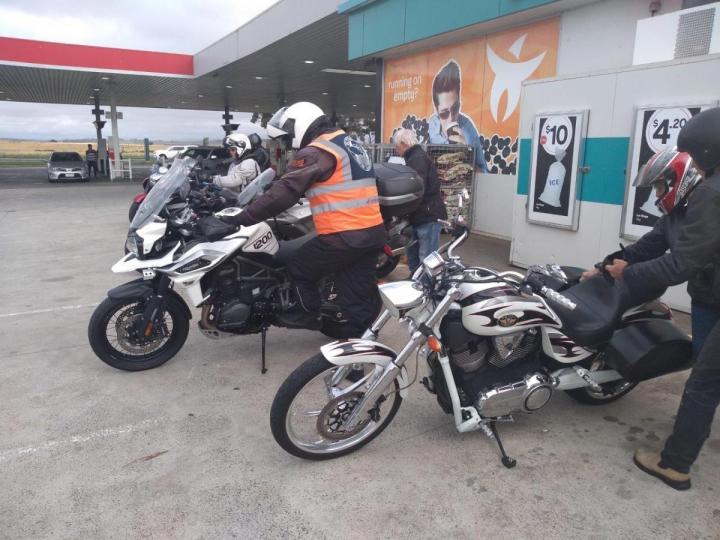 Ian, Jeff, John M, Les, Mike, Steve and Stewart plus Pat doing TEC duty.
Due to my tardiness, there was no real time for greetings and we rode off promptly.  The trip east along Donnybrook Road was slowed by roadwork related speed restrictions associated with all the new developments and it seemed to take longer than usual quite a while to get out to Merriang Road.  It really was impossible ignore the changes occurring with the new estates.  Once we turned north the contrast was immediately obvious as we passed farmland with numerous hay bales scattered around in the paddocks and we settled into some truly enjoyable riding.
Vince led us up the gently winding road past Heathcote Junction and Wandong to Broadford and we then rode north via some delightful bends at Sugarloaf Creek 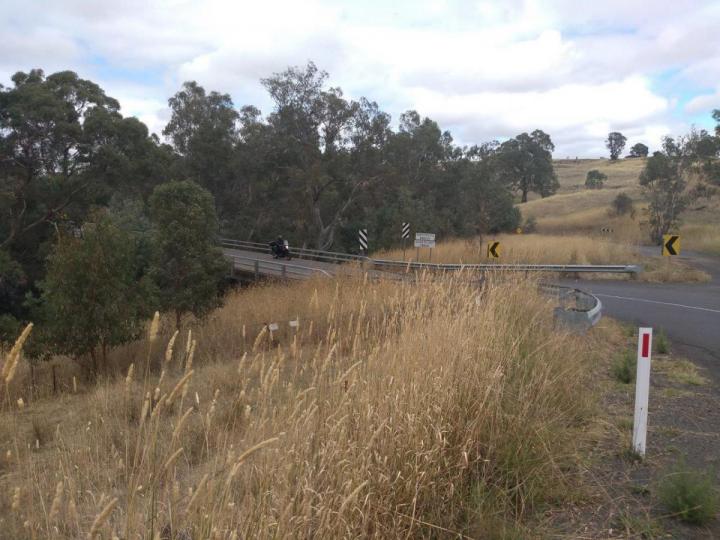 to our rest break at Seymour where I finally managed to fuel up.  Seymour was quite busy, and we saw lots of other riders out enjoying themselves.   We then popped under the old rail bridge and headed off via some delightful roads past Highlands and Caveat to Yarck where we stopped for lunch.   This was my first visit to The Giddy Goat since the pandemic crisis and I found it a bit weird with the canvas tent out front and no indoor dining.    Hospitality and service were up to the usual friendly standard and I enjoyed my food and coffee.   Farewells then started as those heading back to the north and west made their way off.  A substantial group of us then rode the Maroondah Hwy back to Alexandra before enjoying the side road back to Molesworth and on to Yea.  Clearly a misunderstanding occurred there, because after riding past Break O Day on our way to Glenburn, we encountered Steve coming the opposite way!  He did a U turn and joined us again and later boasted of his extraordinary navigation skills!
A small group of us then continued down the Melba Hwy and met wet roads and hints of rain as we crossed the Divide and I had a sense of déjà vu but it was dry again as we entered the Yarra Valley and bid each other farewell Yarra Glen.
I had another great day out  - Thanks Vince and all who came along.

Photos have been loaded here:
https://ulyssesmelb.com/ride-album/yarck-ride-7-february-2021
And Ian's video is available Here:
https://www.youtube.com/watch?fbclid=IwAR37tpmamL4k7yDndqFSDedXCySPZm3gvJ1wqgJKRVWXrUco-qDqjNXN2Jw&v=S4vxpUNFm9M&feature=youtu.be