The Lilydale to Grantville Ride 11 July 2021

A dozen of us got together in bright sunshine at Lilydale for the ride to Grantville. 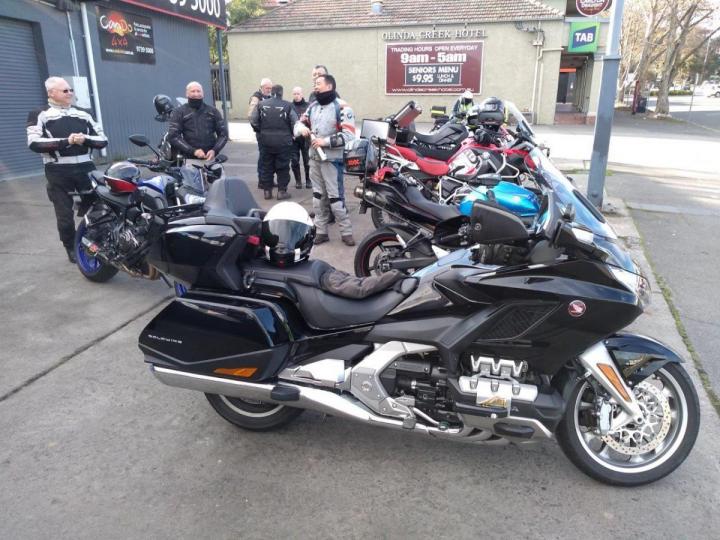 It was warmer than forecast with abundant sunshine and a relatively mild temperature.   There was a great mix of people and bikes and I’ll try and summarise.
Dave on his Buell made a welcome return.  Colin, Jack, Ian and Nic were all mounted on GS BMWs with Ian doing tail end duties on his F series.  Andrew and Geoff were both on club plated Hondas, Steve was on his Gold Wing and I made up the Honda contingent on the old Pan European “taxi”.   Frank, Mike and Reece were mounted on 3 very different Yamahas.
Once greetings were exchanged and briefings were done, we rode along the Warburton Hwy to Wandin and then took to the back roads.  As we headed east, the mists in the valleys around Yellingbo looked lovely, but that changed once we plunged into them and started contending with damp roads, damp visors, poor visibility and the odd oncoming car without headlights!   We rode through delightful scenery (which no-one actually saw) to the Hoddles Creek area and then the mists basically cleared and we rode to Gembrook via the lovely curves and forests of Kurth Kiln Regional Park, but were busy being cautious on the damp and slippery roads.  On the plus side, we had no issues with traffic going our way after Wandin until the last few kilometres into Pakenham.
After a leisurely break at Garfield (where a member almost got lost in the old cinema building), we rode straight south to Catani and then crossed back through Ripplebrook, Invermay Road West and then south to Loch via Poowong.
After all those bends, I “toyed” with stopping for a photo opportunity and brief rest Cape Horn Lookout.  With the benefit of hindsight, I should have done exactly that.
We rode on and used Jeetho West and the Bena – Kongwak Roads and took in some fantastic views of the truly green rolling hills of South Gippsland.  This also involved innumerable bends plus contending with damp and slippery patches particularly on constantly shaded bends, so the riding was challenging.   I enjoyed riding still more bends and continued via Archies Creek and back up to Ryanston, before the lovely descent to Grantville via Glen Forbes.
As I arrived in Grantville, it became apparent there had been a problem and thanks to modern communication devices, we established that a member had “come off” somewhere in the Glen Forbes area.  “Big Dave” and others retrieved the bike from where it had gone over the edge and the member was able to ride on and catch up with us for lunch and a chat about the “off”.   A sobering reminder for us all and it confirmed to me that I should have thrown in the extra rest break despite the ride being just over 200 km.   On the plus side, the member’s protective clothing did its job and he had nothing more serious than a couple of sore spots – plus a damaged bike.
After a good long rest and chat, we accompanied the member concerned back to Greater Melbourne before we headed off our separate way for the final few kilometres home.
Many thanks to all who came along and all who helped.  The camaraderie shone through.

Photos and a video from Ian Monk are here:  https://ulyssesmelb.com/ride-album/grantville-ride-11-july-2021
I'd really appreciate some extra photos Hint Hint

Had an absolute ball, awesome

Had an absolute ball, awesome roads as usual, thanks for a great day out all,