Barry, Graham, Ian and I decided to head out on a mid-week late spring ride to explore a bit of the South Gippsland Coast and the NSW high country while it wasn’t too hot.
We set off on Monday 14 November and it certainly wasn’t too hot! (a dampish meeting near Seville)
The rough plan had been to explore coastal spots such as Ports Welshpool and Albert and enjoy some seafood along the way.  The combination of rain and strong winds and then on to Bruthen where we spent the night.
Tuesday was a much sunnier day.  We enjoyed the diversion along the coast between Marlo and Cape Conran. We had a “cuppa break” at Cann River, refuelled at Eden and literally rode into the hills.  We did a bit of zig zagging through some great riding country, enjoyed a simple café lunch at Wyndham. We then found that Myrtle Mountain has its own little weather zone (the only rain we had all day) before riding on to Cooma where we stayed the night.

It was dry when we left Cooma on Wednesday morning despite some hints of snowflakes before we left.  The countryside as we ascended was much more open than the treed mountain roads and curves from lower down and very beautiful in its own way.

The dark clouds directly in our path didn’t look good though and suddenly we found ourselves riding through falling snow shortly before reaching Adaminaby.  We found a disused servo and rode in under the canopy and I finally relented and donned proper winter riding pants. 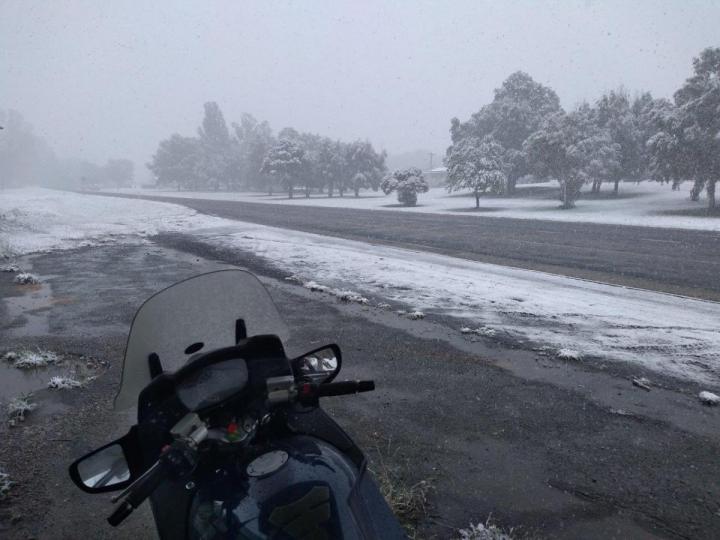 A check of the weather radar indicated a local snowstorm, and it didn’t look like moving on.   The amount of water I saw coming off car tyres as they drove past was far from reassuring, but we decided to ride on anyway.  Riding the slushy road through falling snow in poor visibility was challenging so we pushed on gingerly through some spectacular looking scenery – snow covered trees and fields.  After about 3 kilometres, I was starting to doubt the wisdom of pushing on.  Things then improved gradually, and normal visibility and grip returned a few kilometres further along and riding through steam rising off the road was quite eerie.  We stopped, took in the scenery and decided to abandon the original plan to do the high altitude route past Cabramurra and descended to Tumut instead.  That descent was also very enjoyable.  We then rode on past Batlow and the descent down a valley into Jingellic was truly beautiful.   We crossed the flooding Murray River into Victoria and again had a simple café lunch at Walwa. From there we rode the delightful Murray River Road to Granya, crossed the gap and stopped at Tallangatta for the night.
On Thursday we headed home via Yackandandah and Beechworth, avoided flooded rivers near Wangaratta and stopped for a lovely cuppa in sunshine at Violet Town. Then it was via Euroa and Merton to Alexandra for a lunch break and over the Black Spur into Healesville and on home.
During the trip we spoke to lots of bike riders on all three nights, many of whom were on their way to Phillip Island for the superbikes.  We stayed at and dined at hotels at very reasonable rates all nights and I simply find such establishments much easier to deal with than caravan parks.   I did 1600 km over the 4 days which enabled a nice, relaxed pace. We probably would have done a few extra side trips to coastal spots had the weather not deterred us, but by not planning to do too much on any day, we had the flexibility to adapt and enjoy anyway.
I thoroughly enjoyed the camaraderie and trip.   Thanks fellas.
Things don’t have to get overcomplicated, and we don’t have to go too far to enjoy some great riding.   I’ve been a Ulyssean for 30 years now, still love it, have a Sunday ride planned for later this month and another weekday ride planned for early next month.  I continue to do my best to enjoy the Journey.

As most would know, not all people were able to make it to our Odyssey in October due to the weather and other factors.
Happily on this trip we were able to pop in and see Ulyssean John (who makes me seem a "junior member") and Rosie, who had had to miss the Odyssey, at Wy Yung on our way to Bruthen and it was nice to share that camaraderie.  It was great to see them after all the interruptions of the past few years.