We had very mild weather in the fortnight leading up to the annual Ice Run and despite the fact that many were away in Alice Springs, or still returning, we ended up with 36 people attending this year’s ride.  Seventeen of us met at Dandenong and got under way promptly at 8.00am on Saturday 24 May in mild conditions with clouds looming further to the south and Samuel performing tail end duties.   We did a “transport” run along the Monash Freeway for about 80 km past Warragul before turning off at Nilma and headed east along ridges on Old Sale Road and then up to Willow Grove and on to Yallourn.  The roads here were quite interesting but also quite bumpy.  From there we continued on to Glengarry and then via the narrow roads around Dawson to our morning tea stop at Heyfield where we met another 9 participants and tried a different café. After a good break which included a chat and introductions, “Pop” took over as my “pilot” and led us through a great variety of roads through places such as Glenaladale, past the north of Bairnsdale and on to Bruthen where we arrived on schedule for lunch.   Unfortunately one group member had an “off” near Glenaladale and did quite a bit of cosmetic damage to his bike.  The bike’s “crash bars” actually did a great job of protecting both the rider and the mechanical parts of the bike and with a liberal application of duct tape he was able to continue and complete the ride.

At Bruthen we met up with more Ulysses members who had ridden up the previous day, refuelled, lunched and had another chat. We then headed off alongside the Tambo River (this road really is one of the highlights of the trip even with some new speed limits) towards Omeo and I was able to get some photos. I subsequently discovered that my camera had a dirty lens and that the camera has basically reached it’s “use by date” after only 12000 plus photos and some physical mistreatment over the years!

We took a short rest break at Omeo under pleasant blue skies and agreed we would stop atop Mt Hotham to get a group photo. 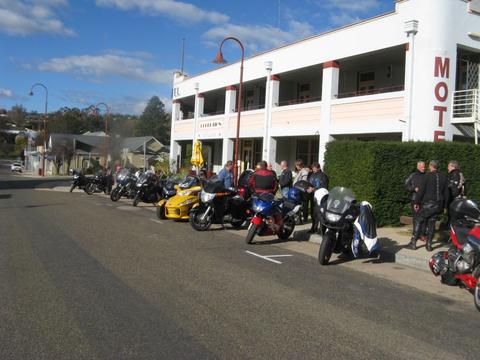 Marshall decided to head off independently and check out the newly sealed road to Mitta Mitta before rejoining us at our destination.     There is a section of fairly tight bends on the way out of Omeo and then we had more open sweepers across the high country on our way into Dinner plain.  We then disappeared into quite thick cloud (fog) and that put paid to any thought of scenic group photos atop Hotham. We continued on slowly in poor visibility.   The road heading down the mountain to Harrietville was quite damp and very slippery looking so caution was exercised.   Several people did have minor slides on some odd sections of road surface.

Once down the hill, we continued through some small villages and then turned right off the Great Alpine Road and enjoyed the lovely climb up to Tawonga Gap with it's lovely view over the Kiewa Valley before descending into Mt Beauty for some last minute supplies. We then climbed the road with many tight bends up to Howmans Gap and arrived there just before dark after doing a bit over 560 kilometres from our start point. Marshall had already arrived after taking his alternative route and was sporting a fresh graze on his face and said a stick had hit his face.   Further discussion on that topic revealed that he in fact was hit by the stick (logs actually) after his Versys had had a bit of a “lie down”.

We were made welcome by Mark and once settled into our dorm rooms we adjourned to the dining room for a few well earned drinks and the exchange of some disgraceful lies and reminiscing. Di provided us with a hearty meal started with soup and a roll, followed by a main consisting of chicken and vegetables and rounded off with a dessert and she even joined in with a few jokes.  All very convivial, some then adjourned to the adjoining lounge and chatted around the fire whilst other remained in the dining room with some music videos providing background entertainment.  The evening passed all too quickly.

A hearty cooked breakfast was served up by Di and then we prepared to hit the road again. Di came out and checked out the bikes paying particular attention to Nev’s Spyder. The temperature was still relatively mild in the morning and made the descent less challenging than usual.   We reassembled at the fuel station in Mt Beauty and then headed up the Kiewa Valley Highway before heading up the Happy Valley Road to Rosewhite, where we turned right and skirted around the back of Myrtleford via Mudgegonga.   This road added a few kilometres and was very open but still had a couple of very tight corners on it which were capable of catching out those not paying attention.      We then continued on to Oxley for our regular morning tea stop.   Roads again showed signs of recent rain but we were lucky and it remained dry. From there we continued up the King Valley to Whitfield and then over Tolmie (another great road but heavily policed) to Mansfield, where we stopped for lunch and fuel.

The group started to break up then as people started to scent “home”.   We agreed that more of us would break off after a short stop at Yea, but somehow by the time we reached Yea many others had already broken off to make their own ways home.   We continued down the Whittlesea Road and then turned off towards Break O Day and waved farewell to those continuing on to the northern and western suburbs.  The remainder of us continued through to Glenburn and then down the Melba Hwy to eventually part company in Lilydale.   As Matt pulled up beside me at the lights in Lilydale, he commented that he had clocked over 1,000 km since leaving home on Saturday.  We then bid our final farewells and made our way home.

I had a great weekend and frankly I was not at all disappointed that the ride did not live up to the name “Ice Run”.   Again, I would like to thank all those who came along and made it such a successful and enjoyable event plus Mark and Di for the great value accommodation and food combined with friendly hospitality.