One early August 2010 Saturday morning over hot, fresh coffee and crisp toasted egg and bacon sandwiches some of the Melbourne group who regularly meet in Elizabeth Street got to thinking about their next adventure.  Dates were selected and a route was roughed out on a paper napkin.

Some wanted a coastal run, some thought the mountains would be good, others wanted to see "significant" places while others suggested an inland path.  In the end everyone got what they wanted!

The initial planning was performed, a route was mapped out using Google maps (and then distributed to the intending riders), accommodation bookings were made, bikes were prepared and kit was packed.  Of course, partners permissions were obtained.

It was agreed we would all meet up at Macas in Nunawadding at 0730 on the morning of August 26.

With the weather forecast predicting, " rain, winds and cold", there was no better time to set off for a 4day ride into and around the high country.  The four of us, met as usual at the Nunawading Maccas, to be waved off by Les, who claimed his bike needed tyres??

We started off by leaving the big smoke via Yellingbo picking up John (Skuta's brother-in-law).  Fang was a bit hesitant about going up Johns driveway as it was not a sealed or concrete path - there was horror of horrors - a unsealed bit of road.  Courage up all went well and we proceeded on to Launching Place, Powelltown and Noogee. The coffee and a pie at Noogee was most welcome, and the town is a lot quieter that at weekends.

John was very handy getting us back on track when we missed a turn after Noogee and started climbing Mt Baw-Baw.

The roads were wet and slippery, although no rain fell, so we had to stay vigilant and our travelling speeds were slow, but our spirits were high as we were on suitable bikes and suitably attired (with about three levels of clothing).  In fact I can say that at least one off us never took his long-johns off, day or night for the whole 4 days.

We travelled on to Heyfield, where John left us to return home and for lunch and that gave us a chance to stretch our bike-legs up to the speed limits although the wind was quite strong for this leg.

After a quick fuel stop at Bairnsdale we headed to Bruthen, where at that point we turned off the Alpine Way, towards Buchan.  This was an exhilarating part of the trip, as while it rained heavily and also hailed for a time, with wet slippery roads, there was little traffic and we were able to concentrate on smooth safe riding.

We made the Buchan caves area too late for the tour but the trip into the sanctuary was enlivened by a family of kangaroos keeping us company as we rode through the reserve.

We found our digs to be a comfy family log cabin, at the top of a steep 150 yard long, gravel drive-way.  Again Fang was concerned about the gravel driveway - to the point where at least one of us thought he was going to bottle it and turn back.  But like Don Quixote, he gathered himself together and got to test his gravel drive skills both climbing and descending the next morning.

We stayed in the Buchan Log cabins where we had a family cabin that would sleep 6 - the cost was $160 for all of us. View from the Cabin balcony As you can see - the cabin was comfortable and warm

Dinner that night was in the town's sole pub and we were made welcome by the cooking staff, who treated Fang like a king, and the barman who dispensed ever larger glasses of amber... A good thing we only had to walk back to bed.

Following a great sleep, in rickety bunk beds, we set about day 2!

We awoke to a crisp frosty Buchan morning After a very hearty breakfast at the Buchan Pub - which by the way we can all highly recommend as an eatery - we headed off with the intent of making Michelago (just before Canberra) our next overnight stop.  We had originally intended to head north from Buchan, up Gelantipy Rd, through the Snowy River national Park to Bombala via Tubbut, Bonang and Delegate but that was not to be as we learnt just before setting off that the road was blocked by snow just after Wulgulmerang East.

So quick re-rout planning.  We travelled South-East down the Buchan - Orbost roa  to Orbost  and from there down on to the coast at Marlo then around the coast to Cape Conran where we turned North East and on to Cann River.  From there we headed North up the Monaro Highway, through Bombala and on to Cooma where we stoped for lunch.

leaving Cooma, still on the Monaro we came upon our intended overnight at Michelago around 2pm and decided to continue on.  We travelled on through Canberra with glimpses of foreign embassies, Parliament House, the High Court and best of all a coffee shop for afternoon coffee.   In the ACT bike parking is not free and you must pay to use a street side park so when we stopped for coffee, being conservation minded - we got all 4 bikes into just one paid parking spot!

After coffee in Kingstone we headed off crossing lake Burley Griffin and through "down town" Canberra and on towards Yass only to find that a bridged had collapsed over the Barton Highway near Crace - this resulted in a 30 minute detour through the Canberra  suburbs before we were able to eventually rejoin the Barton and head on to Yass.  Arriving at Yass we rode up and down reviewing possible accommodation and finally settled on the Australia Hotel.  A room for the 4 of us cost just $15 each.  While the room was a bit "tired" is was clean, comfortable and above all quiet.

Great meal that night in the local Chinese. After yet another great breakfast we headed off towards Wee Jasper and from there on to Tumut. Crossing the Murrambidgee on the way to Wee Jasper

Just a couple of Km's after Wee Jasper where the roadway switches from sealed to dirt (by now fang was a seasoned dirt rider - all fear was gone) we came upon a farmer pushing a mob of sheep up the road. 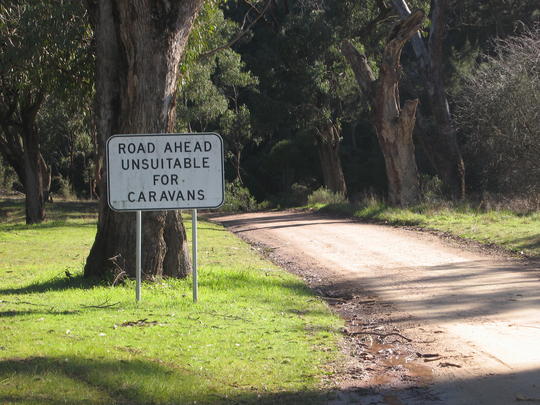 At Wee Jasper with 65km of this before Tumut

The farmer told us that just 9 km further on there was a forestry road off to the left that while it starts as dirt, after just 10 km becomes a bikers heaven sealed 4 lane road built for the timber trucks, that leads into Tumut.  So the choice was 65 km of dirt on the regular Wee Jasper-Tumut road or the forest diversion.  We chose the forest.

Here are a few pics taken on the first part of the "alternate" forest road..... Well as promised by the farmer this did turn into a fantastic 4 lane sealed private road all the way to Tumut - and the best part was we had it all to ourselves.  Arriving at Tumut we stopped at the local bakery for lunch and coffee.

After lunch it was on to Bright via Batlow, Tumbarumba, Jingelic, Guys Forest, Tallangatta, Gundowring, Tawonga and then over Tawonga Gap and on into to Bright and our overnight accommodation at the outdoor-Inn where we each had our own private rooms - at just $27 each. Private accommidation complete with undercover parking at the Outdoor-In, Bright

It was just a 2km ride into town for a slap up pub meal - boy those senior discounts are great!  Back to the Outdoor-In by 9pm for a good nights sleep. Up and ready to roll by 0830 we headed back into Bright and back to the pub for a "big country" breakfast. and after that we hit the road.  Just out of Bright we saw this view of Mount Buffalo covered in winter snow. Pressing on through Myrtleford we headed along familiar roads  to Marysville for lunch in the bakery .

After Lunch it was on thru Healsvilleand  on on to home.

4 days, 1850 Km and an immeasurable amount of enjoyment most on roads never before covered by any of us.

I'm starting to get jealous fellas.  Maybe the time to advance from semi retired to retired is approaching?