Thank you from Bob Tate

The branch ride on 17 January 2016 finished with lunch at Jerusalem Creek on Lake Eildon, where we met up with former branch president Bob Tate.

Bob has now "hung up" his riding boots and the committee decided to give him a certificate of appreciation for all that he has done for the branch over many years.   For those who aren't aware, Bob was the branch president back in the early 1990s and even after retiring from the committee he continued to provide wise counsel, chaired the branch AGM meetings for many years and had established a tradition of leading the year opening branch ride before having to decide to hang the boot s up last year.  Put simply, Melbourne Branch has much to thank him for.

We invited Bob along to meet up with us for lunch as the ride was finishing near his home in Alexandra as he has done on quite a few occasions.  On this occasion we added a bit of a surprise for him.

Here is his response;

"Could you please post this on the web site for all to see, rather than me put it on my blog.
On Sunday the 10th January I was invited to attend the lunch at Jerusalem creek near Eildon, after the Sunday ride (on 17 January) . When we were all getting ready to leave I was surprised to be drawn to attention of all the members standing behind me with Greg our President giving a speech in my honour and presenting me with a certificate of appreciation for my years in the Ulysses club and the contributions I have made.
I wish to publicly thank all those responsible for the complete surprise and the honour they gave me, something I deeply appreciate myself and feel very humble in its acceptance. I tried to say a few words at the time but as usual when surprised words did not flow as well as they could have, so as briefly as possible now.  Thank you all very much for the honour and thought behind this certificate.
In April 2016 I would have been a member of the Ulysses club and the Melbourne branch for 29 years and have renewed my membership for the next three years last December 2015 and I have enjoyed every minute of this time and as I have said the Ulysses club changed my life and allowed me to see just so much of Australia which without the bike and the club I would never have seen. I went through 5 bikes and travelled around 500,000 kms over that time.
My thanks and gratitude to all concerned.
Bob Tate
Member 1028".
Here are a couple of photos from the ride and presentation 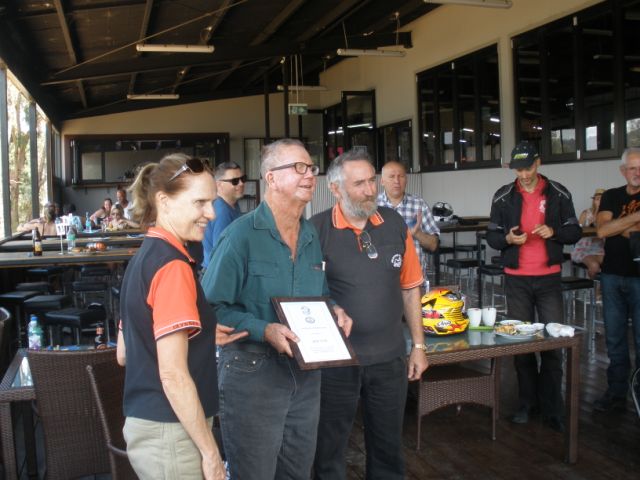 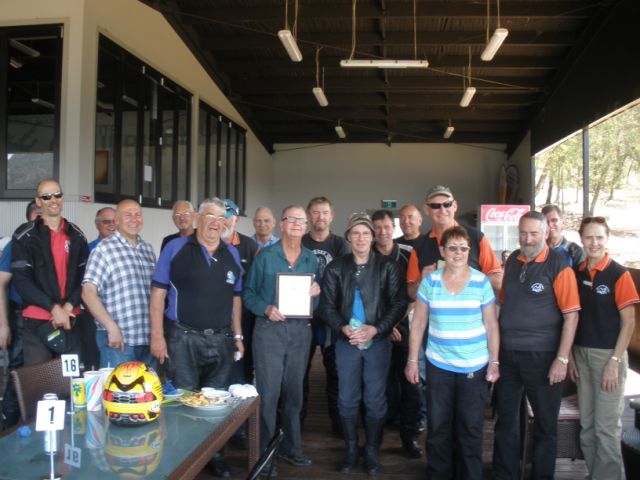 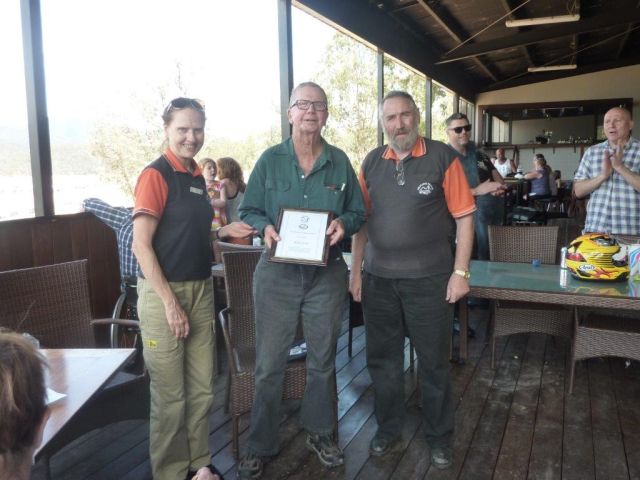 ‹ Nostalgic Ramblings from the Website Editor up Your 2021 Committee ›